A 17-year-old boy has been jailed for life for the murder of a teenager at a Hallowe’en party in Ovenden last year.

Michael Thompson, from Huddersfield, stabbed 17-year-old Jamie Brown, from Halifax, on East Park Road on 27 October after a disturbance broke out outside the party. 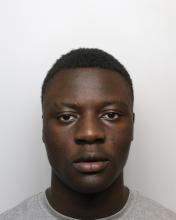 A group, including Thompson, tried to get into the party when an argument started between them and Jamie and his friends, who were already inside.

Some of the group were in possession of knives and hammers.

It is believed individuals from the two groups had been involved in an altercation at a party the previous week.

During the disturbance on 27 October, Thompson stabbed Jamie in the lower abdomen. Despite the best efforts of paramedics to save him, Jamie sadly died a short time later.

The violence didn’t end there and continued into surrounding streets, shops and takeaways in Ovenden. In that disorder, a second 17-year-old was stabbed after pursuing Jamie’s killer.

Extensive CCTV, forensic and video enquiries led detectives to arrest five males, including Thompson and four others aged 15, 16, 17 and 17, in connection with Jamie’s murder.

Thompson was charged with Jamie’s murder on 17 November and found guilty on 3 June following a four-week trial at Leeds Crown Court.

He was also found guilty of possessing an offensive weapon, violent disorder and his involvement in the stabbing of the second male.

He was jailed for life with a minimum sentence of 17 years.

A 16-year-old boy was charged with section 18 wounding over the injuries inflicted to the second victim and violent disorder. He pleaded guilty on 1 May on the first day of the trial and was today jailed for three years.

A 17-year-old pleaded guilty half way through the trial to violent disorder for his part in the disorder. He was jailed for 12 months.

The further 15 and 17-year-old were found guilty by the jury on 3 June of violent disorder, and were today given a 12 month referral order.

Detectives in the Homicide and Major Enquiry Team led the investigation.

Detective Inspector Andy Cass said: “The tragic death of Jamie has had a lasting effect, not just on his family and friends but also on the wider community.

“He should have celebrated his 18th birthday last month, but instead his family are trying to come to terms with his death. I would like to praise their bravery and composure throughout the criminal proceedings and I hope today’s sentencing can bring them some degree of comfort.

“Jamie’s killer went out that night with the intention of inflicting injury and worse, and did not hesitate to pull out a knife. He then tried to dispose of it by throwing it down a drain.

“This case highlights the devastation of using knives; carrying a knife is never the answer. The decision of those convicted to carry a knife resulted in two young men being stabbed, and one of those young men losing his life.

“The sentence imposed today on Jamie’s killer and the others involved shows how seriously the courts and police continue take offences of this nature.”

Login with your Social ID

This site uses Akismet to reduce spam. Learn how your comment data is processed.

Bradford hailed as one of the best places to do business

Beware Of Your Continuing Liabilities

Police appeal for information following a serious assault in Bradford

Jan 29, 2020Jan 29, 2020 Urban Echo
Police are appealing for information following a serious assault in Bradford. It is believed to have occurred at around 9pm on...

Jan 29, 2020Jan 29, 2020 Urban Echo
Bradford Council is setting out plans for an energy network which will provide low carbon and low cost heat and electricity...